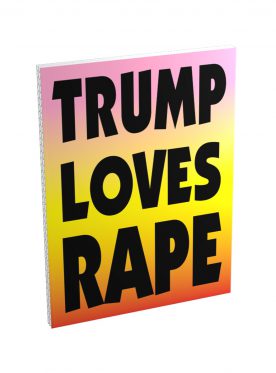 Part of all proceeds will be donated to Downtown for Democracy, a political action committee based in New York.

DARKER GAYER DIFFERNT is part of New Proverbs, an exclusive line of protest signs and posters made by Paul Chan and Badlands Unlimited. They first premiered at the history making Million Women's March in Washington D.C. and New York (January 21, 2017) and have since appeared at the LGBTQ solidarity rally at the Stonewall Inn in New York (February 4, 2017), the General Strike rally in Washington Square Park (February 17, 2017), the ACT UP 30th Anniversary Rally (March 30, 2017), and other public protests around the US.

The phrase comes from former Fox News executive vice president John Moody, who wrote in a news column bemoaning the diversity of the 2018 US winter Olympic team. Moody wrote, "Unless it’s changed overnight, the motto of the Olympics, since 1894, has been “Faster, Higher, Stronger.” It appears the U.S. Olympic Committee would like to change that to “Darker, Gayer, Different.” The column was taken down a day after it was posted and Moody has since left Fox News.

DARKER GAYER DIFFERNT is printed on 100 lb glossy paper and ready to be shown in any public protest or town hall meeting you attend. The poster can also be hung in your office or home, to let your friends, colleagues, and neighbors know exactly what you think and where you stand.