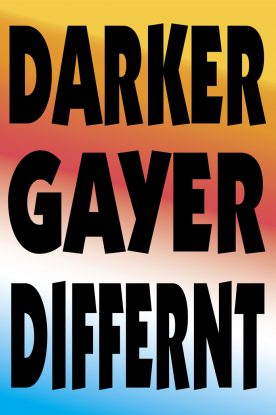 “The most poignant, poetic, and clear articulation of the collective fears of one swathe of society...'New No's' embodies inclusivity”

Own a piece of contemporary art history.


New No's is a poem by Badlands Unlimited written after the election of Donald J. Trump and acts as a declaration against the drift of American society toward what is most un-American.


Designed by Paul Chan and Badlands, this poster is 24” X 36” (60.9cm X 91.5cm). The minimal and stark aesthetic beautifully reminds us of what is worth keeping in mind as we prepare for four years of Nero as president. This work is unframed.

Since its publication in December 2016, New No's has entered into collections and has been exhibited throughout the world, including the Whitney Museum of American Art's exhibition, An Incomplete History of Protest. It was listed as one of the best works of art in 2016 by Holland Cotter in the New York Times and featured as one of the responses to the current political situation in Artforum.

New No's installation at the Bell Gallery at Brown University

Boris Groys mentions New No's (currently on view as part of the Whitney Museum of American Art's “An Incomplete History of Protest" exhibition) in an article in the new issue of e-flux journal: "The r... more

Badlands is pleased to participate in the 2017 New York Art Book Fair at MoMA PS1 (Booth M03, Ground Floor). This year, Badlands will premiere our first installation: a not-so-faithful replica of Y.P.... more

New No's at the Whitney Museum

Badlands Unlimited's celebrated New No's poster—made in the wake of the 2016 election—will be included in an exhibition of works from the Whitney's collection, An Incomplete History of Protest, openin... more