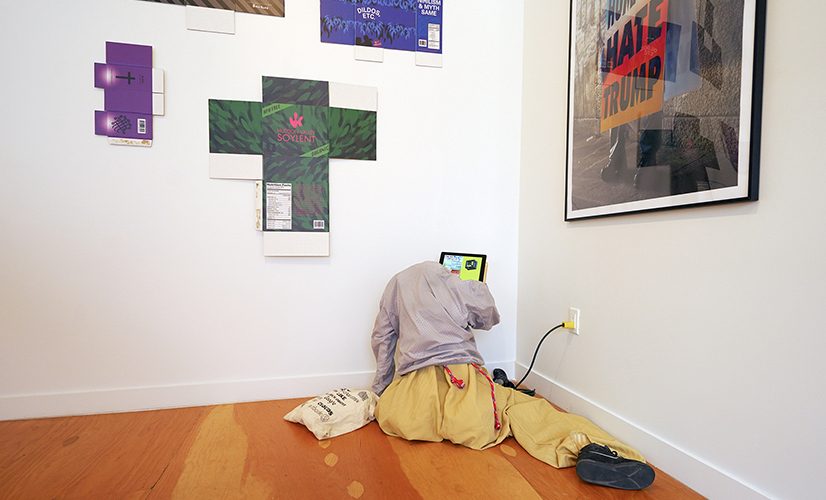 “Publish And Perish” is an exhibition that features over 100 artworks, publications, artist editions, and ephemera produced by Badlands from 2010 to 2018, and showcases the aesthetic and editorial interests that made Badlands a singular, diverse, and unpredictable publishing enterprise. Highlights include the original manuscript for On Democracy by Saddam Hussein (2012), which was originally smuggled out of Baghdad during the 2nd Gulf War in 2003, Badlands’ first profit and loss statement in 2010 (total loss), mockups of unpublished and unrealized projects, and a series of oil portraits by Paul Chan depicting infamous publishers from history who were touchstones for Badlands.

Badlands was an artists-run publishing company. Ian Cheng served as Badlands’ first director (2010-2016). Miceala Durand was the second director (2016 - 2018). Matthew So was the first “CFO.” Cassie Raihl and Nickolas Calabrese headed production. Parker Bruce was the editorial assistant and “operator” at the office, while Ambika Subramaniam led research and development. Everyone at Badlands was either an artist, a filmmaker, or a writer.

Badlands’ editorial and design spirit was largely shaped by how the office was initially based out of an artist studio. But it was also modeled after legendary independent presses of the past, like New Directions, Hogarth Press, Grove Press, and Olympia Press. Badlands focused primarily on publishing “trade” books, or books for a general readership. In other words, Badlands’ ambition was to publish books and works that reached beyond the “sanctuary” of contemporary art. In a talk given in 2018 at the Met Museum’s Artists’ Books Symposium, Chan said:

"[Badlands] is always looking 'outward.' We know of course that communities are important because they offer us sanctuary, a place to belong to, and at times protection from what, paraphrasing John Stuart Mill, called the great onrush of humankind. But we can also admit that sometimes sanctuaries protect us by isolating us from that great onrush. This isolationism impacts us in a number of ways. It makes us inward looking rather than outward looking. It cultivates a taste for premium treatment for the community we happen to belong to, above the needs of others—perhaps even to the detriment of all others. Badlands is always outward looking in form, content, and methods of distribution. We’re always looking to go beyond the fields and sanctuaries that we happen to belong to."

Emerging technologies and unconventional forms of publishing were also crucial to Badlands’ mission. Historical distinctions between books, files, and artworks are dissolving rapidly. Badlands published and produced new works by artists and writers that embodied the spirit of this emerging dissolution.

Also on display is the Badlands library. The library is a collection of books the press used as references and guides. They include classics like Small Business For Dummies by Eric Tyson (2011), the Chicago Manual of Style, 16th Edition (2010), Friendship by Maurice Blanchot (1997), and publications by fellow independent publishers and art book makers such as Primary Information, 38th Street Press, and Temporary Services.

This exhibition marks the end of Badlands as it has existed since 2010. It’s time. But remember what Seneca said? Desinunt Ista, Non Pereunt