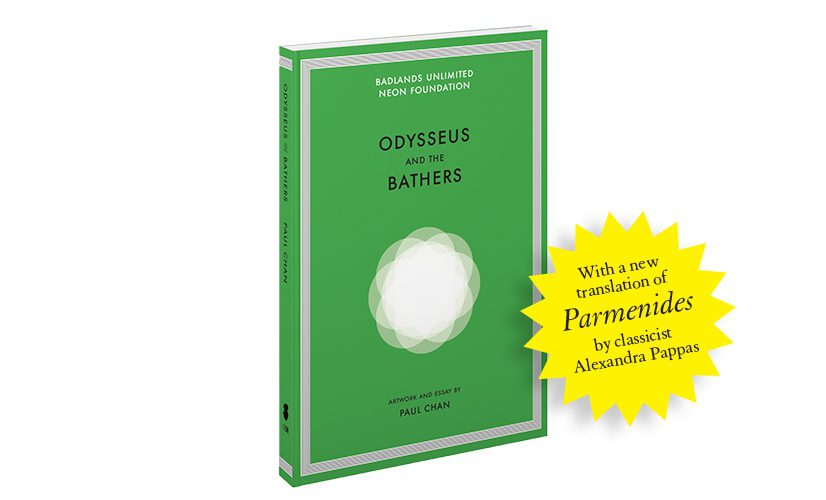 For a limited time, every copy of Odysseus and the Bathers will be signed by Paul Chan. Offer good until February 1.

Badlands Unlimited is pleased to announce the release of Odysseus and the Bathers by Paul Chan, featuring texts and interviews by Sam Thorne, Nicholas Stampolidis, Elina Kountouri, and fragments by the pre-Socratic philosopher Parmenides (5th century BCE), newly translated by classicist Alexandra Pappas.

What makes Odysseus such a contemporary character even after 2,000 years? Why is the quality that Homer attributes to him (polytropos, which loosely translates as “cunning” or “many-sided”) so evocative of questions that binds art and reason, creativity and ethics, freedom and conformity? Odysseus and the Bathers documents the 2018 eponymous exhibition by Paul Chan at the Museum of Cycladic Art in Athens, Greece. Inspired by the “polytropic” nature of Odysseus, Chan has created a body of work he calls “breathers”: kinetic sculptures that move unlike anything else in contemporary art. An essay by Chan explores the concept and history of polytropos and its relationship to what Marcel Duchamp called “the creative act.” This book also features an essay by curator Sam Thorne, a conversation between Nicholas Stampolidis, Director of the Museum of Cycladic Art, and Elina Kountouri, Director of NEON, on the notion of “polytropism”, and fragments by the pre-Socratic philosopher Parmenides (5th century BCE), newly translated by classicist Alexandra Pappas, which illuminates how Odysseus’s “cunning” echoes traditions of thinking in ancient philosophy.

This beautiful hardcover book has over 50 color illustrations and was designed by Kobi Benezri. Odysseus and the Bathers is a co-publication of Badlands and NEON.

Odysseus and The Bathers