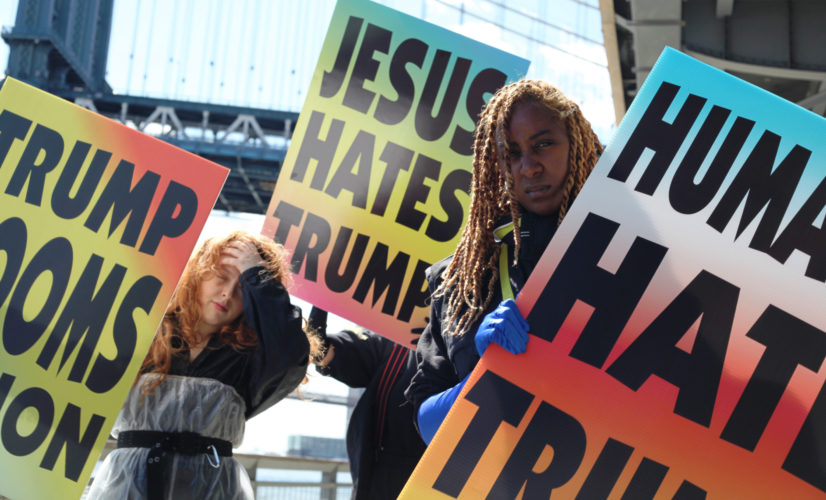 Come celebrate the last day of Paul Chan's show at Greene Naftali Gallery with the launch of New Proverbs, an exclusive line of protest signs made by Chan and Badlands Unlimited. New Proverbs premiered at the history making Million Women's March in Washington D.C. and New York. They have subsequently appeared at the LGBTQ solidarity rally at the Stonewall Inn in New York, the General Strike Rally in Washington Square Park, the ACT UP 30th Anniversary March & Rally, and other public protests around the New York area.

Badlands have produced a limited number of New Proverbs signs and will work with a national network of arts centers and independent bookshops to sell the signs in order to raise money for non-profit groups. These include the ACLU, Planned Parenthood, The Ida B. Wells Society (a news trade organization dedicated to increasing the ranks, retention and profile of reporters and editors of color in the field of investigative reporting), and Black and Pink (a support and advocacy group for LGBTQ prisoners). Badlands will also donate signs to protest groups, arts centers, and community groups across the country so the signs can be used in rallies and gatherings everywhere.

Durable, provocative, and beautiful, the signs are 24" x 36" and printed on archival inkjet prints and mounted on corrugated plastic. They will be sold at 30% discount at the launch. A number of first edition "prototype" signs will also be available. Come support Badlands and organizations dedicated to justice and equality in these great times and get your exclusive New Proverbs signs!

All online orders will be shipped starting April 17th.